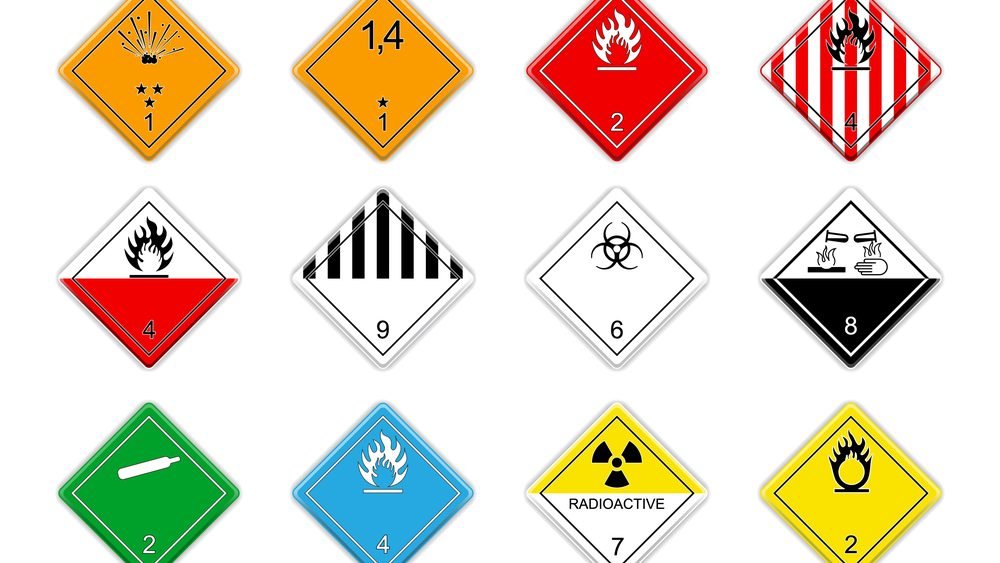 Take it from us: staying safe around hazardous chemicals and substances is much more complicated than just sticking up a hazchem sign and calling it a day!

As we’ve mentioned before, there’s a whole bevy of different legal requirements that come with storing and using hazardous chemicals and materials, one of which is using appropriate hazchem signage.

In particular, it’s important that any areas where you store chemicals and other hazardous goods is identified with dangerous goods class diamonds.

Now for the hard part: figuring out which one these diamonds you need to keep your workplace safe!

What are hazchem labels and dangerous goods class signs?

Australia uses a system of labelling for dangerous goods based on globally-recognised standards. This system helps you to immediately recognise:

These categories are then identified using hazchem class diamonds, with each class having its own unique colour, icon and number.

In cases where shipments contain mixed substances or different substances are stored in the same area, you may even need multiple class signs.

So, what are the classes recognised in Australia?

Thankfully, this is pretty straightforward!

Represented by an orange diamond with the words “explosive” and a pictogram of an explosion, class 1 substances include:

Depending on the substance, it could be fire that makes them explode – in others, it could be an electrical current. Each one is different – be sure to identify the potential causes with emergency information panels and custom signs!

Methane, propane, butane, hydrogen… each of these are gases that can burn when exposed to an open flame.

As with all things fire-related, this class of substance is represented by a red diamond with a flame. 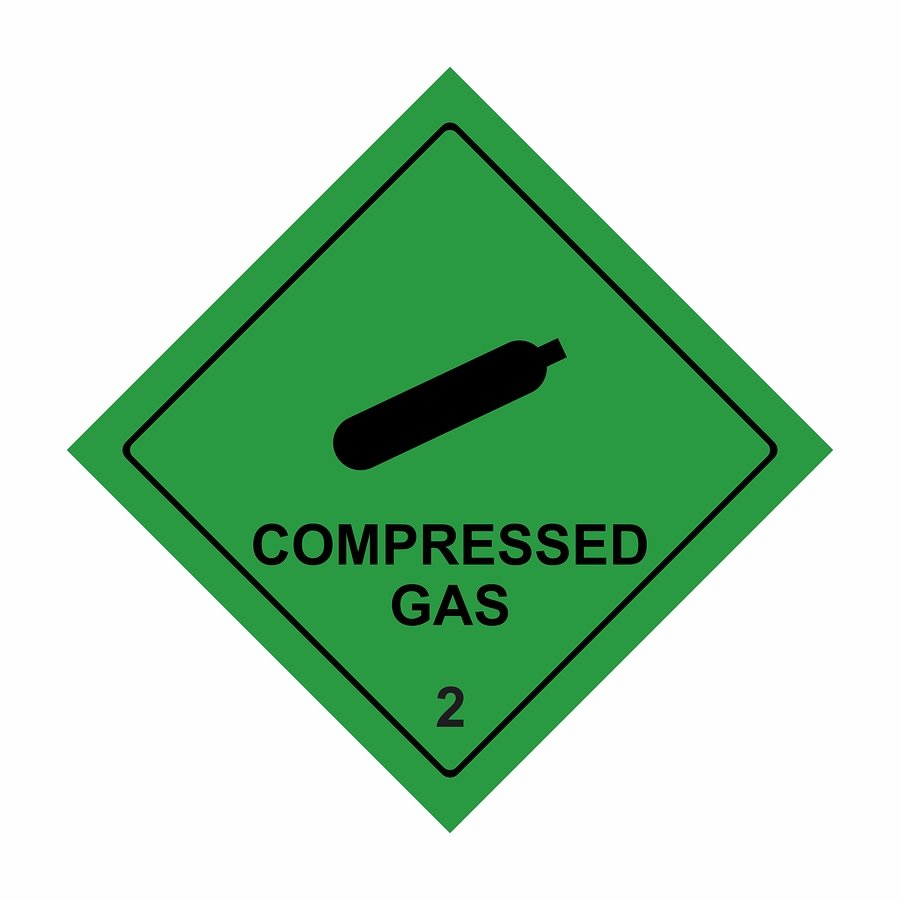 That’s because these gases are often stored under significant pressure, and thus contain considerable amounts of stored energy. A leak or puncture can result in the container flying around – just picture a balloon being let go!

These gases are represented by a green diamond, with a gas container printed.

These gases are poisonous, and can be harmful when inhaled. In certain cases, they may also be flammable too!

This subclass is represented by a while hazchem class sign, with a skull printed on it.

Flammable liquids are without a doubt the most common type of hazardous chemical on Australian roads – after all, 81% of Australian cars run on petrol.

So it’s little wonder that this is one of the most common hazchem class signs we sell here at Signsmart; petroleum companies like Caltex are some of our biggest clients.

Petrol isn’t the only flammable liquid however – other examples include kerosene, diesel and even alcohol.

And just like flammable gas (class 2.1), flammable liquids are represented by a red diamond with a fire pictogram. The only difference is the number and the text on the sign.

It isn’t just open flames that can cause these solids to combust – some can become reactive when they come into contact with oxygen, and in some cases, even water!

In addition to burning, these solids can also emit toxic gases as a byproduct of burning.

As such, each of these solids has its own dangerous goods class sign. Each uses the globally-recognised fire pictogram – however, the colours and text change depending on the subclass.

When it comes to flammable solids, class 4.1 refers specifically to solids that need direct exposure to a naked flame or extreme heat to ignite. Some examples include:

To differentiate these from flammable gases and liquids, these dangerous goods class signs use red and white vertical stripes instead of a solid red background.

These solids are the most dangerous to transport, owing to their volatility. Specifically, these solids can combust when exposed to oxygen!

Yes, such a thing exists. Examples include:

These substances require very careful handling and specific storage methods and procedures in order to ensure they don’t catch alight.

Dangerous goods class sign for these solids have a white top half, and a red bottom half, a bit like the Polish flag.

Yes, you heard us right!

Certain solids like calcium, sodium and magnesium can create a chemical reaction when exposed to water or moisture. Not only can moisture from the air cause a fire, but you may actually make the problem worse by using water or foam to extinguish them.

Additionally, solids in this subclass can also emit flammable gases when wet.

Thanks to their unique properties, extra precautions should be taken. In particular, we suggest getting in touch with your signage company for custom signage to ensure that your staff know how to react safely.

Oxidising chemicals aren’t necessarily flammable in themselves – however, they can easily contribute to a fire, thus necessitating their own hazchem class signs.

Specifically, these refer to chemicals and substances that give off oxygen, which can fuel fires. It also includes substances that react with brunable materials in such a way that their presence dramatically increases the chance of a fire or explosion.

Pool chemicals, peroxides, nitrates… each of these can greatly increase the risk of combustion of other chemicals or materials.

This subclass contains all oxidising agents, with the exception of organic peroxides (more on that below), and are represented by a solid yellow diamond with a unique pictogram.

Manure is a great example of an organic peroxide. Manure emits methane, a greenhouse gas which is highly flammable.

When stored in close proximity to flammable liquids or solids, you dramatically raise the chances of a fire.

These organic peroxides are represented by a diamond with a red top and a yellow bottom. Picture a beach safety flag with the standard fire pictogram on it, and you have the right idea!

While there are 3 distinct subclasses of poisonous and infectious substances, we’ll be focusing on class 6.1a: toxic substances.

Like the name suggests, these are liable to cause death or serious injury to human health if inhaled, swallowed or absorbed through the skin. As such, they need to be treated with care, and often have special regulations regarding proper handling.

These are just some of the more common examples. Others include industrial chemicals, as well as pest control poisons. All substances that fall under this umbrella are identified by a white dangerous goods class label with a skull on it.

These chemicals will eat away at a wide range of materials and surfaces. They corrode, dissolve and even melt the materials they come into contact with.

That can include fabrics, tables, flooring and containers that aren’t made of suitable materials. Some are even strong enough to corrode metal!

So what hope does your skin have?

These substances can cause immediate and oftentimes serious harm to the human body. In many cases, the fumes they emit are also dangerous if inhaled.

As such, these substances need to be handled with extreme caution. Staff need to wear protective equipment, and require special containers.

And naturally, they also have their own hazchem class diamond.

These substances have their own class diamonds, feature two pictograms: one of a hand being splashed with acid, and one of a surface being corroded, with a white top and a black bottom.

Each of these substances poses a risk to health and wellbeing – however, they also don’t neatly fit into any of the other categories.

That said, they still need to be identified with hazchem class signs.

Miscellaneous hazardous and dangerous goods class labels don’t have a pictogram – there are just too many that fall into this category. Instead, they’re simply represented by a diamond with a white bottom half, and a black-and-white striped top half.

You need to get in touch with Signsmart!

Hazchem and dangerous goods class labels are an important part of keeping your workplace safe – especially if you regularly deal with hazardous and dangerous substances and goods.

Of course, it isn’t as simple as just picking out a sign – when it comes to hazchem class diamonds, it’s important that you choose a sign that matches the hazchem class.

What’s more, if a sign demonstrates multiple of these attributes, it will also need several class diamonds – one for each class it falls under.

And we haven’t even gotten started on the other signs you’ll need if you work with hazardous and dangerous goods!

Need help? That’s what Signsmart is here for.

In addition to supplying hazchem diamonds, (with rapid turnover to boot), our team also ensure that your signage complies with Australian regulations as well as your OHS requirements.

Contact us now
for dangerous goods signs and labels